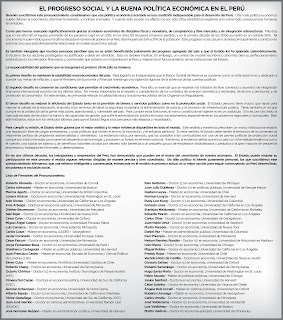 By MATT MOFFETT And ROBERT KOZAK

The appointments, especially that of Johns Hopkins and Harvard University trained economist Luis Miguel Castilla as economy minister, were well received by Peru's business community. Mr. Castilla, 42 years old, is "somebody that one can rely on to maintain fiscal discipline," even as Mr. Humala tries to ramp up social spending, said Guillermo Arbe, chief economist at Scotiabank in Peru.
Familiar Faces

Mr. Humala, a 49-year-old former military officer who takes office on July 28, named as prime minister Salomon Lerner Ghitis, a businessman who has been one of his closest political advisers. Kurt Burneo, a technocrat highly regarded by markets, will be production minister.

The appointments, coupled with Mr. Humala's move earlier this week to retain the respected central bank president, Julio Velarde, should help dissipate a cloud of uncertainty that has hung over the economy since Mr. Humala won the first round of voting in April.

While Peru's economy has posted 12 consecutive years of growth, Mr. Humala has often spoken out vehemently about the deficiencies of the current economic model and the need to spend more on Peruvians who haven't yet shared in the prosperity. Although he adopted a more moderate tone in the runoff campaign than he did in the first round of balloting, his populist background and frequently changing statements on policy damped financial markets and prompted many businesses to put big investment projects on hold.

"I think we're going to see a reversion of the paralysis and the flow of investment is going to start moving again," said Eduardo Moron, an economist at Lima's University of the Pacific. "Up to now, it seems as though Ollanta is convinced that he can do what he wants [in social spending] without breaking the fundamental economic model."

But analysts caution that Mr. Humala faces a host of complicated problems that will test his commitment to staying the economic course. Peru is beset by more than 200 social conflicts in towns throughout the country, many triggered by environmental and economic disruption caused by mining companies. Mr. Humala will also be challenged to maintain the support of his left-leaning base as he reaches out to markets and more moderate allies. Finally, the incoming president will have to try to satisfy the rising expectations of the poor, whom he promised higher pensions and wages.

Mr. Castilla has served as deputy finance minister in the outgoing centrist government of President Alan Garcia and has also worked at the World Bank and Andean Development Corp., a regional development bank. Humberto Speziani, the head of Confiep, Peru's largest business association, said the naming of Messrs. Castilla and Lerner Ghitis was "very good news." Mr. Speziani noted that Mr. Lerner Ghitis was a "successful businessman," whose ventures include a helicopter transport company.

Mr. Humala also named Carlos Herrera, an engineer, as minister of energy and mines, a post he had previously held from 2000 to 2001. Peru is the world's largest silver producer and a big producer of other minerals, such as copper and gold. Mr. Herrera will assume the post at a sensitive time, as the Humala administration seeks to raise mining taxesamid booming mineral prices.

Mr. Burneo and the new defense minister Daniel Mora, both had experience working in the centrist government of Alejandro Toledo, who served from 2001 to 2006, and who supported Mr. Humala in the runoff after having been eliminated during the first round.

Bret Rosen, Latin America sovereign strategist at Standard Chartered PLC, said there appear to be parallels between the Peruvian political transition and that of Brazil in 2002-2003, after former union leader Luiz Inácio Lula da Silva was elected president. He said Mr. da Silva, like Mr. Humala, is someone who had long been mistrusted by investors for staking out positions that were perceived as being radical. But once elected, Mr. da Silva won over investors with a market-oriented cabinet and responsible fiscal policies, which eventually triggered an investment boom in Brazil.

"Humala realizes that certain things he wants to accomplish as president will be hard to do if the macro goes against him," said Mr. Rosen. "Lula made the same calculation in 2003." Mr. Humala has often expressed his admiration for Mr. da Silva and incorporated two Brazilian political advisers from the ex-Brazilian president's Workers Party to key positions onto his campaign team.
—Ryan Dube
contributed to this article.